Broadbent B & B Foods originated in Trigg County Kentucky.  The company is named after it's original owners.  Smith Broadbent begin selling Country Ham, Bacon and Sausage from his farm in 1909.  Smith Broadbent, II along with his sons Smith Broadbent, III and Robert Broadbent built a USDA facility in 1965 and begin producing USDA inspected Country Ham, Bacon and Sausage.  In 1999, they sold the business to Ronny and Beth Drennan, the current owners.  In 2008 we moved into a new facility in Kuttawa, Kentucky.  Our goal is to produce top quality products and offer top quality customer service to you our customer, "From Our Families Smokehouse, to Your Families Table." 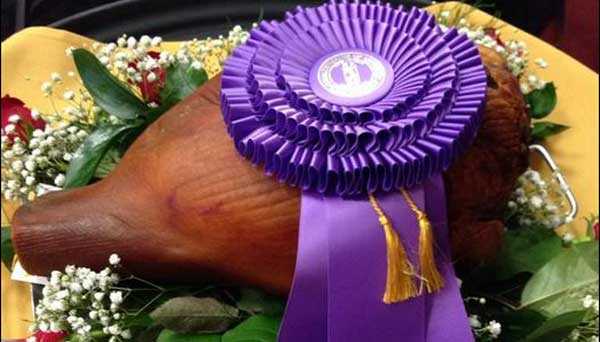 Thank you for for making this, our 56th year in the mail order business!

In 2009, Broadbent's celebrated their 100th Anniversary in the production business of making old-fashioned Country Ham, Bacon and Sausage!


Our facility, located in Kuttawa, KY, has a walk-in market available to serve customers throughout Kentucky. We are also well known for shipping our aged hams throughout America. Winter,  Summer, Spring or Fall, Broadbent ships its hams to all.

We’ve been shipping our hams across the country through mail order since 1965, so we have the experience to get your country ham, bacon or sausage to wherever you live without losing that great Kentucky country ham flavor. All our country hams are aged for 6-to-9 months before they're ready to ship to your dinner table. This hickory smoked and dry-curing process is what gives our hams that distinct Kentucky flavor.

We offer plenty of different kinds of bacon and sausage for sale, including applewood smoked bacon, our award-wining pepper bacon, maplewood bacon and much more. Besides our country ham, we offer a variety of traditional foods for your Kentucky Derby Parties. Browse our website for sandwich toppers, sweets and treats like Derby and Pecan Pies, all natural "Kentucky Proud" veggies, jams and jellies.

Would you like to know where your food comes from and what’s in it, well here’s some “Piggy Facts” about the hams, bellies and sausage trimmings that we purchase to make Broadbent’s Dry Cured and Smoked Country Ham, Bacon and Sausage.

Where do we buy our meat?

Seaboard Foods supplies our  fresh hams, bellies and trimmings.  The pigs are born and raised on their farms located in the Great Plains and Midwest. Pig comfort is a top priority. Their climate-controlled barns keep pigs comfortable and prevent exposure to extreme temperature swings. All fresh hams are purchased from Seaboard except our Heritage Breed Hams.  These facts do not apply to the heritage breed hams.

What is the diet these pigs are fed?

The pigs are fed grain-based diets tailored to the pig's stage of growth and have access to clean fresh water. Nutritionists have developed grain-based proprietary rations designed to maximize nutrition at every stage of animal growth based on Southwest and Upper Midwest environments and genetic requirements. This helps optimize pork color, texture and flavor, while specially formulated vitamin packs improve health, creating nutrient-rich pork for consumers and improving shelf life, juiciness, texture and color. Seaboard Foods does not allow ruminant meat or bone meal in its feed rations.

What is the breed of these pigs?

What age are the Pigs harvested?

Hogs are harvested around 6-7 months age

Heritage breeds are the very foundation of our agricultural history and gastronomic identity. A true heritage breed can be traced back prior to the advent of industrial farming, meaning that they are directly connected to the beginnings of agriculture 5000 years ago. Each breed comes from a unique culinary tradition, with its own pure genetic line, and boasts a different, wonderfully nuanced flavor.

Industrial breeds, the mainstay of the fast food and supermarket industries, were developed through years of cynical genetic selection and artificial insemination. Desired traits in poultry, for example, include obesity, disproportional breast size, and feathers that come off easily. Breeding for these traits create animals that are unhealthy and need antibiotics. Our farmers grow animals that are raised humanely, outdoors, on-pasture, using traditional farming techniques. These animals reproduce naturally, and are never fed antibiotics or growth hormones. Heritage breeds produce the world’s best meat — and that is not just our opinion, it is a scientific fact. Heritage breeds are more marbled, which means more tender and juicy than any industrially farmed meat. Heritage meats boast a profound taste and depth of flavor that has not been squashed by a corporate culture that only cares about rapid production. 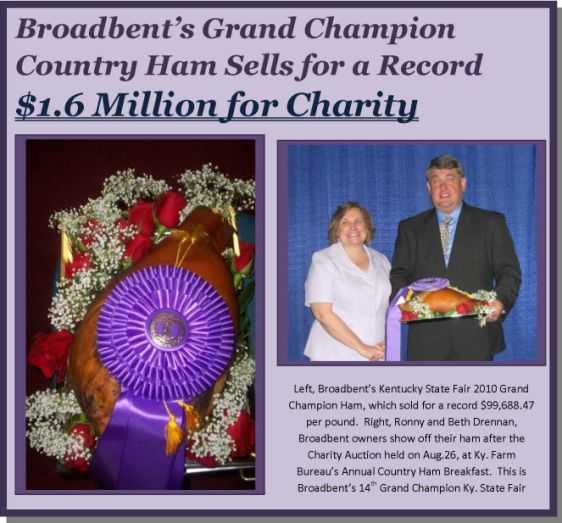 Good Taste takes the prize when you serve a Broadbent’s B & B Country Ham. The Family has been curing country ham, bacon and sausage for 100 years. Smith Broadbent II, along with sons Smith III and Robert founded the retail business in 1966. The Bingham family of Louisville, KY. was also part of the operation in the beginning hence the “B & B” title. A series of family tragedies resulted in the Bingham’s withdrawal from the firm.

The names Trigg County and Broadbent’s are synonymous with the Kentucky’s most famous country hams. Smith Broadbent, III sold the family business to Ronny & Beth Drennan of Fredonia, Kentucky in March of 1999. Sandra Myers of the Kentucky New Era wrote on Aug. 19, 2000, “Those who bemoaned the sale of Broadbent’s B & B Foods two years ago can now rest easy. It’s a well-known fact that curing a good country ham is an art that few can master. However, traditionalist can now put their worries aside, as new owners Ronny and Beth Drennan have more than proven their ability to serve up good country ham. It all happened Thursday at the South Wing banquet hall at the Kentucky Fair and Exposition Center in Louisville when their firm’s 2000 Grand Champion Ham was auctioned during the 37th annual Kentucky Country ham Breakfast. Since the Drennan's have owned the company they have been named "Kentucky State Fair Grand Champion". In 2005 Broadbent's set a record for at the ham auction, with their ham selling for $340,000.00 at the annual charity event. The following year in 2006, they broke their own record with a ham selling for "One Half Million Dollars. Records are made to be broken, on August 26, 2010, Broadbent's Kentucky State Fair Grand Champion sold for $1.6 Million Dollars", that ham weighed 16.05 lbs. making the cost per lb. an unbelievable $99,688.47. This year, on August 17, 2011, Broadbent's was again named Grand Champ with the ham auctioning of $600,000.00 for charity.The following is a listing of Broadbent winnings at the Kentucky State Fair:

[The Kentucky State Fair is the oldest competition we attend. Approximately 12-14 Kentucky companies compete for the Coveted Grand Champion Award each year. This competition consists of 6 classes with 1st , 2nd and 3rd place awards given. Classes 1-4 are made up of hams of different ages and weights. They are judged on appearance and aroma. Class 5 is the Best Taste or Cut Class where the ham is cut, cooked and tasted. Class 6 is awarded to the competitor with the highest score for the total of all five hams entered.]

"I recently tried your beautiful product and I fell in Love both with Taste and the Texture."

"OH Man...We just tasted the cooked ham...Wow!  I am not typing this my taste bud are!!

"I order your ham pieces and hocks every year and make bean soup, then portion and freeze the soap.  It is by far the best ham to use and people rave about it.  These Yankees down here in Florida don't know much about country ham, so when I gie it to them they think I am a chef or something....

This was the first time I've gotten the bacon and it its the best."

"My parents won't buy country ham from anyone other than you.:-)"

"We do love the sausage...and the bacon too!"

"Love the Sausage!  I appreciate the Excellent Customer Service."

"We throw a Derby party each year.  Your ham will be the central point of the meal.  We love to share our Kentucky heritage with the folks down here."